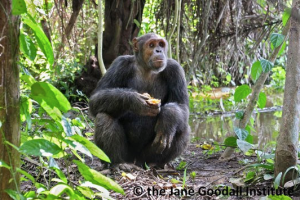 Without Dr. Jane Goodall there might not be any chimpanzees left in our world, at least not in the thick forests of Gombe.

Jane Goodall saw the responsibility the project for saving the chimpanzees had to also help humans sharing the space around the animals. If the humans would not understand how important the survival of these animals was, there would be no way to successfully come to the aide of the animals.

“When Dr. Goodall first stepped foot in Gombe, the forest was lush and stretched on for miles. However, as the decades passed, human encroachment has steadily crept toward Gombe National Park and swaths of deforestation surround the once pristine forests.
Dr. Goodall saw this firsthand when she was a passenger in an aircraft that flew over Gombe over 20 years ago. She saw that the park, once nestled among fertile, forested hills, was now surrounded by land that had been stripped bare. The cause of this rapid deforestation was human activity. As the human communities grew, they cleared more land for agricultural fields, chopped down more trees for wood, and ventured further and further into the forest. Dr. Goodall knew then that something needed to be done. Recognizing the rampant poverty in the surrounding communities, Jane knew that an approach that improved community health was the only way JGI would have any impact on the forests that the chimpanzees call home.”
You can read more about Dr. Goodall´s Institute here
http://www.janegoodall.org
Thank you for spreading the word on animal awareness!