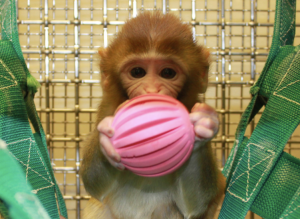 Do children miss their mothers? Do human beings differ from other beings? Have we not learned about these behaviors from various angles in depth over the last years?

“In his 21 years at the University of Wisconsin-Madison’s veterinary school, Eric Sandgren has seen a lot of controversies. But the UW’s most prominent defender of animal research has never seen anything like this.

Sandgren says a typical research project protocol receives around four person-hours of scrutiny from an oversight committee; he estimates this one got more than 170.

“It is the protocol that’s received the most attention since I’ve been here,” says Sandgren, director of the university’s Research Animal Resources Center. “The most intense I’ve been a part of.”

Sandgren is referring to the first experiment at UW-Madison in more than 30 years that will intentionally deprive newborn monkeys of their mothers, a practice designed to impact a primate’s psychological well-being.”

Please read the article, please write to the editor respectfully your opinion, and repost this blog entry if you can

Thank you for spreading animal awareness!

2 thoughts on “Psychological Torture for Primates”