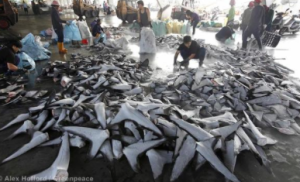 In some minds there still remains this picture of the big bad white shark, a man eating machine, not an animal. An animal with feelings, especially pain when the fin is cut off. An animal feeling fear when dropped back into the ocean and not being able to swim.

“Pulled from the water, a shark thrashes helplessly as its fins are hacked from its body. Mutilated and in pain, the shark is thrown back into the ocean. Eventually bleeding to death or suffocating.

Each year this torture is how millions of sharks around the world needlessly meet their end. All so their fins can be sold in soups served at expensive restaurants and fancy weddings. The shark fin trade is cruel, unsustainable, and it’s being fueled in large part by the tuna industry.”