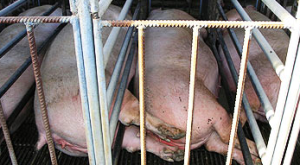 Is Punjab going to lead the way in preventing cruelty toward pigs? If only other countries would follow in the footsteps of this country´s grand decision:

“Back in June we posted on Facebook about shutting down India’s only gestation crate facility, a swine farm seeking to introduce this intensive confinement practice into the country. Sows confined in gestation crates aren’t able to turn around and often can’t lie down comfortably for months at a time. Such extreme confinement causes physical and mental suffering for these intelligent, sociable animals.

Closing the facility was a good start, but we also wanted to win broader and long-lasting protection for pigs, and we have good news to report!With further encouragement, the Government of Punjab has now issued an official direction making this type of intensive confinement an offense under the Prevention of Cruelty to Animals Act. Officials in the government confirmed with us this week that their focus is now on alternatives.”