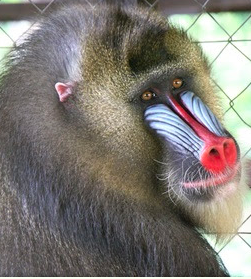 Zoos choose to exhibit animals for a variety of reasons. One of them is beauty. Mandrills, who live in the tropical rainforest of central Africa, have so colorful faces that they stand out against their grey fur. Therefore, they are a big attraction in many zoos. But also people in the central region of Africa like to have them as pets. As with other animals in the wild, catching one means the death of many.

The Jane Goodall Institute not only has a Chimpanzee Rehabilitation Program, but also one for mandrills.

“These bright and colorful primates are often taken from the forest and sold as pets due to their striking appearance and fairly docile nature. This illegal practice, along with other threats such as deforestation and the illegal commercial bushmeat trade – the same threats facing chimpanzees – have critically endangered mandrills.”

To learn more about mandrills please read on here