So soft and cuddly. So pure. So lush. But totally unnecessary. There are so many man-made materials nowadays available that can reproduce the same softness, making this kind of torture completely outdated. And the man-made materials are wearable by everyone, including those allergic to so many animal products.

“French Connection has made the heartless decision to resume its sales of angora, despite being fully informed of the fact that angora is torn from the bodies of live rabbits. Rabbits scream in pain when their fur is ripped from their bodies, and they need your help today! Rabbits who have their fur cut or sheared instead still suffer greatly: Their front and back legs are tethered tightly, and they’re stretched out on boards or suspended in the air. The cutting tools that are used invariably wound the rabbits as they struggle to escape. Afterward, these highly sensitive, social animals are left in shock—they lie motionless inside their tiny, filthy cages, where they’re denied solid flooring and bedding.”

First, there is the good news of an animal being saved after over 50 years of abuse and torture. Not everyone agrees with anthropomorphous ways of thinking, but it is most certain that an animal freed will delight in this newly found freedom.

But going back to the ordeal is probably the worst kind of abuse.

“We rescued Raju after he spent approximately 50 years chained up, beaten, and help captive by beggars in India. His rescue story went viral online because this abused elephant was crying tears of joy when he was finally set free in a loving environment at our elephant sanctuary.

At the time of his rescue he was near death. He was emaciated, dehydrated and exhausted. Despite his frailness, he was forced to beg on the streets and was being kept in spiked chains.

Now the cruel person who had illegal custody of him is trying to get him back through the Allahabad court. You helped free him once by supporting Wildlife SOS campaigns and our sanctuaries.”

In the lush forests of Madagascar you will see lemurs in their natural habitat – if you are lucky enough to get a glimpse through the canopy of shaded green.

Why would a state like Arizona publicize a Lemur Encounter? Arizona has so many things of beauty, innovation and fun to offer, setting up live lemur races are totally unnecessary.

“Arizona State Fair officials are on the fence about whether or not they will keep Winners Circle Lemur Encounter on the fair’s October 10 to November 2 lineup after hearing PETA’s concerns. In addition to what’s billed as an interactive lemur exhibit,the fair is also publicizing multiple live lemur races that will be held nearly every day of this lengthy fair.

Last year, the owner of the Winners Circle exhibit, Barry DeVoll, was issued an official warning by the U.S. Department of Agriculture for failing to provide adequate distance or barriers between lemurs and the public—a serious public-safety violation that caused a 3-year-old boy to be bitten by a lemur during a similar event. And that’s just one of many incidents in which lemurs have scratched or bitten children. Other violations incurred by the Winners Circle since 2013 alone include filthy facilities, repeatedly leaving a sugar glider in a plastic tote with no ventilation for prolonged periods of time, and more.” 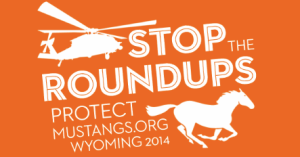 “Sep 18, 2014 — Outrage is spreading with the news of the first casualty from the Wyoming Checkerboard roundup.

A young yearling colt died of a broken neck in the roundup holding corral. In the wild, the colt would not have broken his neck because he would be free to move away from what frightened him but once trapped and shoved in captive holding pens, these wild animals often get hurt and some even die. The young colt was a federally protected American wild horse who had lost his freedom, his family and then his life.”

The great Wild West will get less wild and lose all of its appeal if the rounding up of wild horses and burros continues. These round-ups are especially egregious since there are no holding places available for the animals.

“Despite public outcry, the BLM wants to continue rounding up America’s wild horses and burros–even though most of their holding facilities are inhumane without shade and shelter and are already stocked full with 50,000 native equids. The Burns Amendment to the 1971 Free Roaming Wild Horse and Burro Protection Act puts ALL those in holding at-risk of going to slaughter. This is very dangerous.” 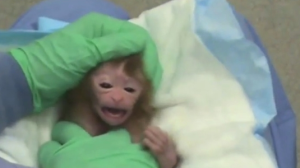 Update: Please sign the petition on change.org by Dr. Ruth Decker, thank you!

For those planning to work under such conditions as described in the following articles, it might seem natural to never express any kind of empathy. For other sentient beings knowingly administering pain to a living being feels torturous at both ends. Many experiments have been going on for centuries and no essentially new findings have come about in any recent experiments.

“Scientists at the University of Wisconsin plan to torture defenseless baby monkeys for cruel psychiatric experimentation. Newborn rhesus macaque monkeys will be traumatically torn away from their mothers and then sent into solitary confinement without nurturing. There, the isolated monkeys will be subjected to various threatening maneuvers and stimuli including live large king snakes all intended to terrorize the infants. The baby monkeys are killed by the age of two and their brains dissected.”

More and more birds are losing their homes due to loss of habitat. The National Audubon Society is painting a bleak picture for the future of birds, telling us, that more and more species will disappear by the year 2050.

Here are some tips to help the birds in your area through the next winter: 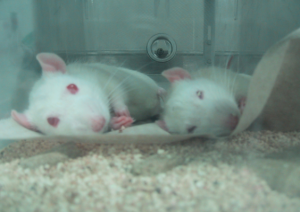 There are more and more countries in the world who have completely stopped and banned all testing on animals for products used in cosmetics, cleaning and hygiene. Some countries have moved forward and will stop in the near future. Why are some countries not supporting this move? If more companies are told that the consumer will no longer buy products tested on animals pressure will get them to rethink their policies. And then pressure will mount on changing the legal side of this kind of torture.

“India is well on its way to becoming a cruelty-free country following its recent ban—enacted, in part, thanks to PETA India’s efforts—on testing cosmetics on animals as well as the proposed ban on importing animal-tested cosmetics into the country. Now, the Indian Beauty & Hygiene Association (IBHA)—an organization representing L’Oréal, Procter & Gamble, Unilever, and other companies—is actively challenging these efforts to end animal testing.”

“Looking for more ways to help? Check out the following suggestions:

Please speak up, read more and sign all petitions against animal testing

Oh, these poor hunters! Banning ivory has made them anxious on how they can keep their weapons since many have ivory inlays. So they come running to those senators who support hunting and who like to kill themselves.

“Senator Lamar Alexander (R-TN), whose endorsements include the National Rifle Association, has introduced a bill (The Lawful Ivory Protection Act of 2014; S. 2587/H.R. 5052) to prevent the U.S. Fish and Wildlife Service (FWS) from implementing much needed regulations in the U.S. to combat elephant ivory trafficking.

This bill is wrong at a time when nearly 100 elephants are brutally killed by poachers every single day.

Senator Alexander, with the support from Congressman Steve Daines (R-MT), claim to be concerned about the new rules impacting any owners of “legal” ivory, however the FWS’s new rules allow for the possession of legally owned ivory, so in reality, their concern is for gun owners and “sportsmen,” whose guns and rifles, knives, and weapon cleaning equipment often contain ivory from killed elephants and for elephant trophy hunters.”

Clean water will become one of the major problems if regulations and laws are not passed to protect them. One species is especially in need of healthy waters: river otters.
“River otters need healthy headwater wetlands and streams to filter pollution out of the waters that flow into the rivers where they live.

But right now, many of these smaller waters are at increased risk of pollution and destruction, because Supreme Court decisions have made it unclear which waters are protected under the Clean Water Act.” 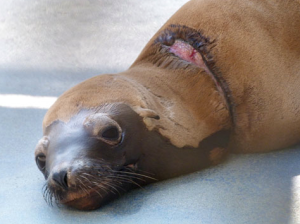 If you have been on the coast lately you will have noticed that with the waves rolling onto shore come all sorts of trash. Walking along a beach there are no longer only shells and pebbles you find, but all sorts of trash. And most of this is deadly for the animals who live in the water or next to it.

“Spiderpig, a young California sea lion with a severe entanglement injury, demonstrates how damaging the problem of ocean trash can be. He recently arrived at The Marine Mammal Center, just in time to show the importance of Coastal Cleanup Day.”

Coastal Cleanup Day is September 20th, 2014. So no matter what coast you are on on that day, please go help and collect as much trash as you can.