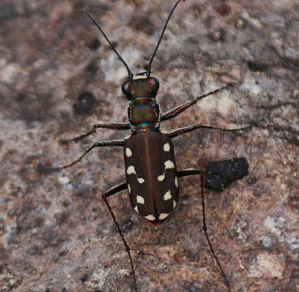 Most people think of insects as pests, more like rats (so undeservedly hated), only smaller. But without insects we literally would starve since plants rely on insects in many ways. So even if you are not fond of these little critters you should want to help them survive.

“With development pressure intensifying on the Grand Canyon, the Center for Biological Diversity is taking action to protect two species found nowhere else on Earth but the canyon’s wet seeps.

Our emergency petition to the U.S. Fish and Wildlife Service seeks federal protections for the Arizona wetsalts tiger beetle and Macdougal’s yellowtops (a flower in the aster family). Both little-known but important species are in danger from groundwater pumping to support massive new real-estate developments planned for the tiny town of Tusayan, near Grand Canyon National Park’s south rim.

These developments would draw water from the same aquifer that feeds the springs that support these species — and since the developers have no plan in place to safeguard them, the beetle and flower will go extinct if they don’t receive Endangered Species Act protections right away.

“The Fish and Wildlife Service must act quickly to protect these rare Grand Canyon species under the Endangered Species Act, or we’ll be at risk of losing an irreplaceable piece of our natural heritage,” said Robin Silver, a Center cofounder.”

2 thoughts on “Insects Should Not Be Overlooked”