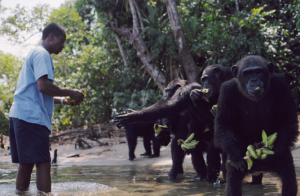 The news about the day in court for two chimpanzees (see Animals in Court) coincides with the story of 66 chimpanzees being abandoned in Liberia. These chimpanzees had been used by an American company but have been left behind to fend for themselves.

“This year, the New York Blood Center (NYBC) abandoned more than sixty chimpanzees that it had used in research and testing for decades. These animals, located in Liberia — a country on the west coast of Africa — are now in danger of dehydration or starvation and need our help.

In the 1970’s, NYBC worked with the Liberian Institute for Biomedical Research to create Vilab II — a laboratory that obtained and bred chimpanzees for use in research and testing. Once NYBC decided that the chimpanzees were no longer needed for research, it was determined that they would be permanently retired on islands near the lab in Monrovia, Liberia. The chimps still live there today and are completely reliant on humans for their survival, as there is no natural fresh water supply throughout the year, nor enough food.

As The New York Times recently reported, NYBC withdrew all funding and oversight for these chimpanzees in early March, despite previously committing to a lifetime of care.Since then, the situation has quickly deteriorated. The Humane Society of the United States and Humane Society International have given emergency funding to help provide food and water for the chimpanzees and several dedicated individuals on the ground are doing what they can to help these chimpanzees survive.”

Different counties, different traditions. In the southern part of China each year the Yulin Festival is being celebrated and its main food is dog meat. Does this make the Chinese people savoring this food any worse than for example the visitors of the Virginia Pork Festival? Or the Main Lobster Festival? The Harrod Beef Festival or the Tunarama Festival in Australia?

The world would be a better place if all these festivals could be changed into something more humane.

“Tens of thousands of dogs—many of them stolen pets—are rounded up, crammed on top of each other in cages, and transported long distances under horrific conditions. Once they arrive at the Yulin Festival—a dog meat event in southern China—they’ll be slaughtered and eaten.”

You can read more here and sign the petition:

If you thought seals would be safe this year since there are hardly any states left that would import the skins of baby seals, sadly, this is not true. Canada has – again – allowed the killing of seals for their white fur. And clubbing them to death is the method of choice to preserve the pristine quality of the animal skins.

“Right now, we are flying off the coast of Newfoundland, ready to document, as fishermen shoot and club these helpless seal pups to death for their fur.

Every day is a special day. Some days are more special, though, than others. Some days are there to show that animals need to be in the limelight to save them from people who are too ignorant to care.

“Monday is World Sea Turtle Day, a day when we celebrate some of the ocean’s most beautiful and ancient creatures.

Many tourists will be exposed to the international wildlife trade all over the world, often without even realizing it. In the Cayman Islands, visitors are allowed to hold sea turtles kept in overcrowded and unsanitary concrete tanks. As the animals continue to reproduce, the older ones are slaughtered for their meat and shells that are sold in tourist or craft shops.

And sea turtles aren’t the only victims. Wildlife products are everywhere, and they all take their toll. From elephant ivory to shark teeth, from marine shows to roadside zoos, annually, millions of animals are shot, poisoned, trapped or stolen to become pets, entertainment or souvenirs.”

The Humane Society International, a part of the Humane Society of the United States, wants to raise the awareness for animals being destroyed by the ignorance of people, especially travelers.

You can find more information on the HSI at
http://www.hsi.org