The following gruesome numbers have been made public by PeTA:

Many of you have probably signed petitions or campaigned against the slaughter of the seals this year. Sadly, this gruesome “tradition” of murdering the youngest seals for their beautiful coats is still being done.

The Humane Society of the United States has given this update:

“This year’s hunt started slowly, with only one quarter as many boats as last year setting out for the ice floes. Unfortunately, within a few days the hunt began, and we began recording.

Although 27,000 seals have been killed so far this year, 42,000 were killed in the same time frame last year — and 77,000 in as many days in 2013. The sealers know that the images we document are shutting their industry down. Often, they simply stop hunting when they see us — our presence saves lives.

This year, the Canadian Sealers Association announced that they are scaling back their sealing operations because of economic hardship. And for the first time in decades, the largest seal fur processor in Canada refused to purchase skins because their unsold stock was too large. It has never been clearer that the sealing industry is dying.”

Please continue with your your protests. Even if this year´s slaughter could not be stopped the more people speak up the better the chances are for next year.

If you thought seals would be safe this year since there are hardly any states left that would import the skins of baby seals, sadly, this is not true. Canada has – again – allowed the killing of seals for their white fur. And clubbing them to death is the method of choice to preserve the pristine quality of the animal skins.

“Right now, we are flying off the coast of Newfoundland, ready to document, as fishermen shoot and club these helpless seal pups to death for their fur. 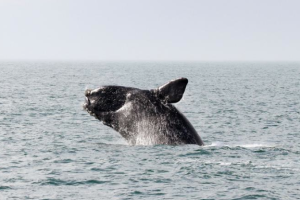 Noise pollution is not only an issue above the water but more and more below the water, too. Many creatures of the oceans have had to adapt to the interference of noise but not always successfully. A new threat is the seismic blasting that takes place in several different regions of the Atlantic. Warnings have come up over the past few years, but so far no one has stepped up and stopped this new torture on animals.

Since “Companies are lining up to begin seismic blasting in the Atlantic. This precursor to offshore oil drilling subjects the marine environment to dynamite-like sound blasts that can go on for weeks on end. The result? As many as 138,000 dolphins and whales could suffer injury or possibly even death.”

“When you purchase Canadian Seafood, you support a brutal commercial industry kept in business by the slaughter of seals. Sealers are fishermen first, and in fact only 5% of their income comes from sealing! The rest comes from exporting seafood to countries like the United States. Despite the small profit margin, the Canadian fishing industry refuses to end this bloody practice. Even Canada’s Dept. of Fisheries and Oceans won’t move to shut down seal hunting until the fishing industry asks it to.”

With their big eyes seals seem to be looking straight into the hearts of onlookers. That some of these animals are blind is something most people never thought about. The Marine Mammal Center in San Francisco has been successful in giving some of these seals their vision back thanks to cataract operations.

“When Solar the northern elephant seal arrived in our care, he appeared to be just another young, malnourished animal. But when our veterinary experts took a closer look, they realized he was blind in both eyes due to cataracts that may have been congenital, meaning he was born with them.

If this story sounds familiar, that’s because it is. Just a year ago, you may remember we rescued and treated another young, blind elephant seal: Cappy. After successful cataract surgery, Cappy was able to return to the wild. He’s since been spotted several times and seems to be thriving. Using what we learned from Cappy’s case, our veterinary team is working hard to ensure a similar future for Solar.

Blindness in seals and sea lions is not as uncommon as you might think, and over the last few months, we’ve rescued a number of animals that are blind in one or both eyes.”